Here's me with some sandwiches, best avoid them, I promise 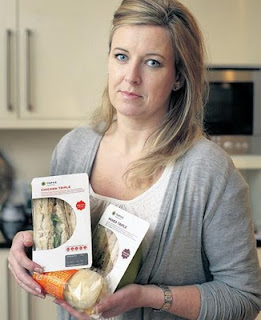 Irish Independent - Smart Consumer: Do you really know how much salt is in your lunchtime sandwich?
By Suzanne CampbellThursday Nov 18 2010


Ignoring the salt cellar at the dinner table might make some of us feel that we're eating more healthily. But avoiding high blood pressure, heart disease and the consequences of eating salt is more difficult than we think as many of us eat high quantities of it without realising.
New research shows that over a teaspoon and a half of salt is eaten every day by most Irish people, causing health risks that we're completely unaware of.


The recommended intake of salt per day is no more than six grams. But the Food Safety Authority of Ireland has found that Irish adults are eating on average 10 grams of salt a day -- putting us at risk of death from heart disease and stroke.


Frequently we don't even know the salt content of many foods that we eat. Meat, fish and dairy products provide about a third of our daily salt intake, with a further 26% provided by bread and rolls.


Other foods that regularly contain high levels of salt are sauces, biscuits, confectionery and breakfast cereals.

The frustrating thing for consumers is that while we may be aware of the dangers of salt, food manufacturers don't always share the same view -- pizzas, ready-meals and the humble sandwich are some of the biggest culprits for high salt content. Sandwiches and ready-meals can contain between 25% and 50% of your daily recommended intake for salt. And using petrol stations for more than a fuel top-up may find you eating more than you bargained for.


Tesco doesn't fare much better, with their Finest range Italian salami and mozzarella sandwich containing 2.6 grams of salt, and many of their ready-meals containing half your daily allowance.
As cardiovascular disease is the leading cause of death in Ireland, the Irish Heart Foundation point out that reducing our intake of salt to six grams a day would save more lives from what is a widespread disease.

Pat Crowley, a GP in Co Kilkenny, explains how salt can work in the body with dangerous consequences. "When you have salt in your bloodstream, your cells have to increase the volume of blood to balance it, and that's the reason blood pressure rises."
Eating too much salt confuses the normal functioning of cells and affects how our systems are balanced.

"Sodium, chloride and potassium constantly work together so that the function of your cells are normal. If these levels are out of kilter or too high, you can develop an abnormality pretty quickly, leading to heart arrhythmia or more seriously, a heart attack."
Many of Dr Crowley's patients find tracking the salt in their diet quite difficult .


"Food manufacturers have always put salt in food as a preservative, so even if you're not sprinkling it on your food it can still be there in large amounts". Salt labelling doesn't help as it's sometimes labelled 'sodium content'. Sodium amounts are smaller than 'salt' as 1.6grams of sodium equal 4 grams of salt. So thinking a chilled Thai green curry is healthy because it has one gram of sodium on the packet isn't the case -- it actually has 2.5 grams of salt.


Indeed "healthy" food options such as wraps and salads can sometimes contain surprising amounts of salt. M&S's Crayfish and Mayo salad contains two grams of salt and their Hoisin Duck Wrap has nearly the same amount. Salad dressings are often hidden sources of salt, as are mayonnaises, sauces and other additions to "healthy" lunchtime options.

Food manufacturers like adding salt because it ties into what we expect food to taste like. But this can lead to health issues not just confined to cardiac-related problems.

"High sodium intake is also linked to osteoporosis and other conditions, so there's a range of dangers people are unaware of," says Dr Daniel McCartney from the Irish Nutrition and Dietectics Institute and lecturer in human nutrition at DIT. Food labelling can be improved -- not all sandwiches or prepared foods show either sodium or salt content and this is more difficult if you buy your sandwich from a deli counter. "At the moment it's not mandatory to label salt content in food," says McCartney. "Consumers should have the benefit of clear labelling because then they can at least make an informed choice."

One thing very clear from our survey is that food sold in garages not only had some of the highest salt content, but it's often purchased by men who are spending the day in a car -- making them a key risk group for cardiac problems. "Research shows that the more educated and affluent people are, the more knowledgeable they are about healthy eating.

"So unfortunately there are sectors of society unaware of the dangers of salt in their diet and the damage it's causing," says Dr McCartney. Taxing convenience foods, like they do in Denmark, may be one way to drive people away from high-salt foods but it could be difficult to implement.

Dr McCartney has an alternative approach. "Subsidising healthy foods might be a better way to deal with this and would be certainly easier to implement. People could then displace foods that they might have planned to eat with something healthier and cheaper."
- Suzanne Campbell
Irish Independent

Read more: http://www.independent.ie/lifestyle/independent-woman/health-fitness/smart-consumer-do-you-really-know-how-much-salt-is-in-your-lunchtime-sandwich-2425449.html#ixzz15eETEMlh
Posted by suzanne at 7:18 AM