From starving on the side of the road to Ring 1 of the RDS. The journey of a rescue pony 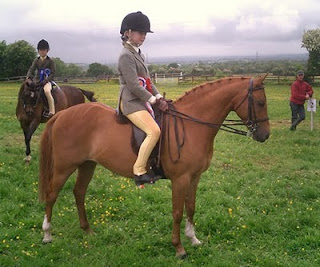 HORSE SHOW SEASON: When Lulu the pony was found by the Irish Horse Welfare Trust on a housing estate, she was rake thin and lice infested. Next week, though, she will take her place in the distinguished surroundings of the RDS for the Dublin Horse Show. SUZANNE CAMPBELL on the work of the trust

NEXT WEEK LULU the pony will find herself groomed to perfection as she enters the ring at the Royal Dublin Society’s Horse Show. But it was on the edge of a housing estate in Finglas where the pony first came to attention, not by a judge wearing a bowler hat, but a volunteer from the Irish Horse Welfare Trust (IHWT).

Lulu’s early misfortune is typical of an increasing crisis in horse welfare across the country that has seen levels of abandoned animals soar. She was spotted by a member of the public, who reported seeing a pony at the side of the road who was tiny, starved and covered in lice. The IHWT took her in, rehabilitated her and found her a loving owner. In a pristine stable yard in Co Tipperary, Lulu now looks like a different pony.

“She was probably only a year old at that stage but had already been put into harness; she still has some marks from it,” says Katie Tobin, who has had horses all her life and became the pony’s guardian after she rang the IHWT and offered to rehome a horse.
“I had enough grazing to keep another animal so I told them I’d take one off their hands – whatever they wanted to give me. When the horsebox arrived, I thought there was no horse in it she was that small.”

In her stable, Lulu is quiet but self-possessed, eyeing us in quick glances as she munches through her breakfast, anxious to appraise her visitors without missing a scrap of her food. It was clear from the beginning that the pony wasn’t the usual offspring from the black and white horses kept around Dublin’s housing estates.

“She has a lot of quality blood in her, and with her pretty head she could be part Welsh pony,” says Tobin. She thinks the pony was probably stolen as a foal and fell into the wrong hands. “I’m just so glad she was picked up by the IHWT and then came to me.”

For the past 10 years, the IHWT has been taking in welfare cases and retraining horses coming from the racing industry, giving them a second chance as riding horses. Currently, it is inundated with rescue cases as economic woes have put many horse owners under pressure; starving and abandoned animals are being reported to it daily. In a new campaign, Welfare Aware, it hopes to raise more money from equestrian-related industries, as it relies hugely on public donations.
“It’s heartbreaking to see the work they do on so little money,” says Tobin. “Without the IHWT, the simple fact is that this pony and many others that they’ve rescued would be dead.”
Tobin saw Lulu’s potential early on and began showing her in hand (without a rider) when the mare was two. “Outside the show ring she was fine, but once inside she would be really badly behaved – rearing, sitting down, everything. I used to be so embarrassed I’d want to leave.”

Then she found a local girl, Shannon Sheridan, who could really ride her and handle her personality. “I’ve no children of my own. I had seen Shannon ride ponies on the circuit and I basically pestered her mother Michelle to death to try Shannon on Lulu. Once she sat up on her, the pair just clicked. She’s a fantastic rider, for a 12-year-old girl she can read a showing class better than many adults.”

Shannon Sheridan clearly knows every inch of the pony and slides off Lulu’s rug for us to have a closer look: “She can get a bit fat so we have to watch her food.” While Lulu has plenty of quality, she is also brimming over with personality. “She landed me in the hospital once when she took a fright at some white tape coming through the field gate,” laughs Tobin.

And what are their chances in Dublin? Tobin is confident. “If Lulu behaves and doesn’t get tense, she will do well.” The pony will take an hour to be plaited up and get her coat shining for the ring, but as Tobin points out, the real work is sorting out her boundless energy before she goes in front of judges. “We work her in sometimes for a couple of hours before her class, she has bottomless energy levels.”

Does Shannon Sheridan think the pony might be a challenging ride in the big surroundings of the RDS? She gives a nervous laugh: “Yeah.”

For Tobin, the hard work and expense in showing the pony and bringing her to the top level of competition has more than paid off. “I have another pony in Dublin the same week, but you know it’s Lulu that I’m really excited about. It was my dream that she would get there, and it’s a real success story for the IHWT. It proves all animals deserve a second chance.”


A nose for bags
LOUISE O’LEARY, the designer behind Louloubelle bags, was so taken with the work done by the Irish Horse Welfare Trust that she is launching a bag in aid of the charity. “I always had rescue cats and dogs from the pound and then I took in a rescue mare. She was found by the side of the road in north Co Dublin. The vet said she mightn’t last 48 hours.” O’Leary named the mare Hazel and watched her slowly improve in health. “For the first few weeks she had her head buried in the grass just eating, then one day she came trotting over to the fence to greet me.”

Since then, O’Leary has found her “an absolute joy. It’s amazing an animal that was mistreated and left to starve can be so grateful for what she has. So I thought, what can I do to help – I can’t take in more horses but I can design, so I decided to launch a bag named Hazel [pictured below] to raise money for the trust.” One of Louise’s aims at Louloubelle bags is to make handcrafted products from ethically sourced leather. A third of the world’s leather comes from China, where animal-welfare practices have received a lot of criticism, and cats and dogs are killed for their fur. For O’Leary, this was an important issue. “I think there is a lack of awareness about where leather comes from; if people knew more about it they might make different decisions.”

When she began her business, sourcing leather that is a by-product of the food industry was a difficult task. “I searched for a long time in Italy for a factory that would produce to high ethical standards. Even Carlo who runs the factory says he doesn’t want to make money off the back of animal abuse. I get offered leather all the time that is cheaper than the stuff I buy, but I suspect it’s coming from China.” For O’Leary, the bag is a way of giving back for the pleasure she has had from giving an unwanted horse a second chance. “The work the IHWT does is unbelievable, they badly need donations and people to adopt their animals if you have a suitable home for one.” The bag is available from ihwt.ie for a special price of €250 (normal RRP is €500). All proceeds will go to charity and the bag will be on view at the IHWT’s stand during the Dublin Horse Show.

Lulu and Shannon Sheridan will be in the Show Hunter Pony class at 9am in Ring One on Sunday, August 8th, during Horse Show Week at the RDS Dublin Horse Show
Posted by suzanne at 4:37 AM